Science fiction is one of my favorite genres. I love reading about the possibilities of the future (even though most people think it is going to be horrible). However, not all science fiction is doom and gloom. The following are three science fiction/fantasy stories with a more lighthearted tale to tell.

The Universe Builders: Bernie and the Putty

The Universe Builders: Bernie and the Putty Book Summary (from Amazon)

Dive into a humorous fantasy world unlike anything you have imagined. A world of gods and goddesses who build universes for a living. Are they all-powerful and all-knowing? Well, not exactly…

As Bernie graduates from God School, he is thrilled to land his dream job as a builder of universes. His first assignment is to build his own universe. Determined but unsure, bright but without confidence, Bernie forges ahead, only to find problems everywhere. Mysterious asteroids, unexplained volcanoes, shifting continents and more lead him to suspect sabotage. But who could sabotage his universe? Only another god could do that.

It’s god vs. god, guile vs. goodness, where only one of them plays by the rules. Bernie must find a way to outwit his vicious foe. If he fails, it will cost him everything.

A fascinating tale of good vs. evil and a young hero on a journey of self-discovery in an original, humorous, fantastic wrapper.

I thought the story of The Universe Builders was engaging, interesting, and fun. My favorite part was the descriptions of how Bernie decided to make the universe in certain ways. Although- he’s not really making entire universes, mainly just a few planets in one solar system. The plot was fun and progressed quickly.

The biggest issue I had with The Universe Builders was simply that they weren’t really building entire universes. I had hoped to see something on a grander scale. However, this was only a minor issue. My other issue with the story is that, in places, the plot seemed to drag a bit and I wasn’t sure where it was heading. In the end, everything ended up in a good place, though.

This book is all about exploring what it might be like if there were a universe of Gods all responsible for creating their own universes. It is fun and lighthearted, and somehow manages to avoid most mention of religion, which seems almost impossible in a book about this topic, but that is one of the reasons I liked it so much. If you don’t mind stretching your thinking a bit while laughing a little at the origins of the universe, then you will enjoy this book.

The Long Dark Teatime of the Soul

The Long, Dark Tea-Time of the Soul Book Summary (from Amazon)

Beloved, bumbling Detective Dirk Gently returns in this standalone novel from Douglas Adams, the legendary author of one of the most beloved science fiction novels of all time, The Hitchhiker’s Guide to the Galaxy.

When an explosion goes off at the passenger check-in desk at London’s Heathrow Airport, the unexplainable event is deemed an act of God. For private investigator Dirk Gently, it’s his job to find out which god would do such a strange thing. In the meantime, one of his clients is murdered and his battle with the cleaning lady over his unbelievably filthy refrigerator comes to a standoff. Is it all connected? Or is this just another stretch of coincidences in the life of off-kilter super-sleuth Dirk Gently?

This was the first series I’ve ever read where it mixed modern life with the concept of gods. It was a new idea to me, which was fun to explore.

Some of the plot lines seemed needlessly complicated. I remember them running around a lot and wondering why they had to be in such a rush all the time.

If you are a fan of the Douglas Adams style of writing and tongue-in-cheek humor, then you will love this story.

Target audience: Someone just getting into the paranormal genre.

Danny North knew from early childhood that his family was different, and that he was different from them. While his cousins were learning how to create the things that commoners called fairies, ghosts, golems, trolls, werewolves, and other such miracles that were the heritage of the North family, Danny worried that he would never show a talent, never form an outself.

He grew up in the rambling old house, filled with dozens of cousins, and aunts and uncles, all ruled by his father. Their home was isolated in the mountains of western Virginia, far from town, far from schools, far from other people.

There are many secrets in the House, and many rules that Danny must follow. There is a secret library with only a few dozen books, and none of them in English — but Danny and his cousins are expected to become fluent in the language of the books. While Danny’s cousins are free to create magic whenever they like, they must never do it where outsiders might see.

Unfortunately, there are some secrets kept from Danny as well. And that will lead to disaster for the North family.

I really like the concepts presented in this story. The North family are descendants of viking gods, who are able to make paranormal events and creations. Danny can’t do anything, he thinks, but when he learns he can open up travel portal “gates,” everything changes. I found the story fascinating from first to last.

I didn’t like how mundane the book was in spots. There is a while where Danny runs around with some human friends and goes to regular school, which bored me. I also was sad that the book ended on such a large cliffhanger.

Now that the second book in the series is out, it would be a good time to read this one. The first book ends on a large cliffhanger, so having the second handy to read right away is helpful.

Adult Fantasy Books that are Readable 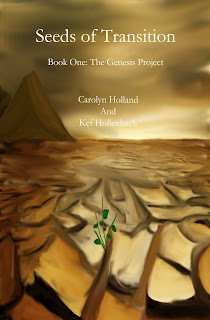 As the world’s population approaches 10 billion people, severe weather extremes diminish crop and livestock production, driving the demand for and price of food to new heights. The American government, as well as other powerful organizations, turns to the world of academia in search of gifted, albeit unlikely heroes.

Dr. Jarod Farra is one of those unlikely heroes. An assistant professor of agriculture at Cornell University, Farra quickly finds himself at the forefront of both his longstanding dreams, and perhaps, some of his worst fears. Dread of the developing global food shortage and ever-worsening weather extremes cause cultural turmoil, political turbulence, population shifts, and economic havoc. Jarod and a range of characters come together to perform an experiment that will change the world, and provide new hope for generations to come with the most radical agricultural undertaking that society has ever seen.

Carolina in a small, rural fishing village. She married right after high school and started her family, in the same community where she grew up. Though life took her to other places, she lived in the Appalachians for a time and later in Alabama, she found herself drawn back to her roots in Coastal North Carolina. With her three children grown now, she resides there still with her husband James Holland, a retired US Marine.

Carolyn has been a writer for many years. In 2009 she began work as a freelance writer and ghost writer and worked on many works in the science fiction genre. Her own personal interest in agriculture, the environment and our effect upon it prompted a lot of study into the effect of weather patterns brought on by climate change on our food and water supply.

In 2012, Carolyn was invited by publishers; Books, Authors and Artists, to write and publish the trilogy titled The Genesis Project. The first book in that series is titled, Seeds of Transition.

I liked the idea behind this book, but I found the way it got there a little dry.

Plot: The plot centers around the near future when the world’s population reaches its all-time high. People cannot get enough food around the world, and extreme weather makes feeding the masses even harder. Jarod was a child during one of the worst disasters, but was able to escape to America. Now an adult, he has vowed to end world hunger and make the world a better place. I appreciated the somewhat more realistic aspect of the plot, versus many popular science fiction books that you see. However, in spots, the book read more like a political commentary than a fiction novel.

Setting: Most of the book takes place around 2037, which is the near future. In some spots, the universe seemed identical to ours, and in others, far advanced or far behind. I didn’t know what to think of the setting, but I thought the attempt to make the book somewhat futuristic while maintaining the feel of life today was done fairly well.

Writing: When I first started the book, I was pleased with the writing. It was vivid, descriptive, and told a lot of the story. However, as I continued reading, the book never seemed to start. It always felt like it was in the introductory phase of the story. I think I was to around 18-20 percent finished on my Kindle before I saw any dialogue. That made the book seem more like a history textbook than a novel to me.

This is an innovative attempt at writing a realistic portrayal of science fiction. The writing is good, and the plot is interesting. However, I felt the execution of the story could have been a little better. Fans of realistic science fiction should enjoy this story.

Writer, Editor, Blogger, Book Nerd
I'm Brenda. I'm a writer and a reader.
Daily Mayo is all about having fun while reading, without rules! If you love books as much as I do, join the DM Book Lover's Club to keep up with the latest in the book world and get the DM Book Club Reading List.
Come get to know me and let's talk books!